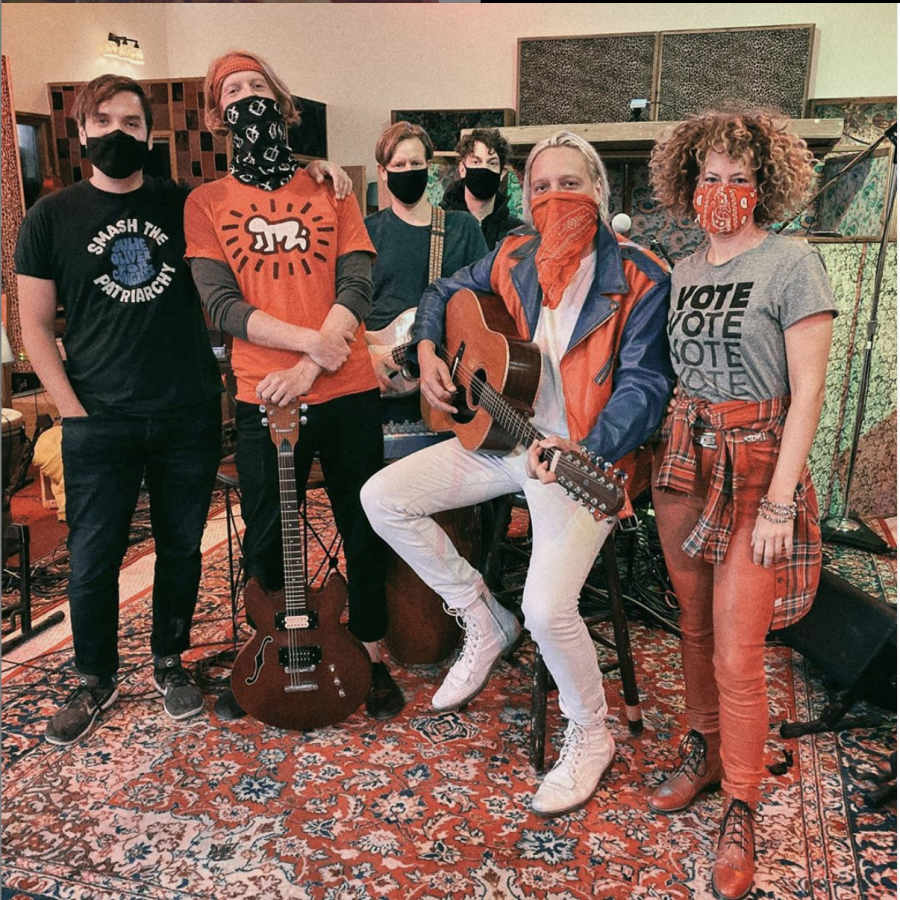 If you’re a fan of Arcade Fire, you’ll know that in April, Win Butler posted a hand-written note on his Instagram confirming that the band has a new album in the works. Win wrote, “Regine and I have been writing for the last couple of years, and the band was a few months into recording new material when COVID-19 hit…We had been exploring a lot of lyrical and musical themes that feel almost eerily related to what is happening now (we actually have a song called “Age of Anxiety” written a year ago for Christ’s sake – ha ha ). Needless to say, the writing has intensified, and the work is flowing out… It is challenging as ever, and with just as much purpose.”

It seems that the lockdown was heavily affecting the production of this album as the frontman’s brother and band member Will Butler confessed in an interview with NME in July. Will told them, “Arcade Fire was recording. Well, we were recording… But now our drummer is in Australia, two of us are in Canada, and the rest are in America,” Butler said. “Australia are having a crazy outbreak, the border to Canada is sealed right now… like, Jesus Christ. It takes more logistics to get together. It always took a certain amount of logistics, but right now it’s insurmountable.

Since Will’s update, we have not heard wind of the status of this album. Will Butler has since released his third solo album, Generations, on September 25, 2020. According to Merge Records’ website, “Generations was recorded and produced by Butler in the basement of his home in Brooklyn. Tracking finished in March 2020, as New York closed down for the pandemic. Half the record was mixed in Montreal by longtime Arcade Fire engineer Mark Lawson, the other half by Brooklyn-based producer Shiftee.” This may give hope to fans, seeing as Will figured out how to produce in these times. But the six-piece Arcade Fire that often features tens of artists in their productions definitely faces a larger challenge with their production.

That leads us to their YouTube channel.  Starting two weeks ago, the official band channel started uploading a recording of a song from a different live show every few days. As of the release of this article, they have uploaded the hits Ready to Start, The Suburbs, Sprawl II, another version of Ready to Start, and Rococo (from the same set as the second Ready to Start). Fans in the comments were quick to ask if this was teasing at a live recording album. The band is well known for having energetic live performances that change things up from their recorded sound. Although their earlier albums are widely regarded as their best, with some fans rejecting their newer sound, I feel as though their live performances are a bridge between the fans of the old and the new.

For now, fans will have to continue to speculate and dream about a live recorded album. That isn’t to say that we haven’t gotten anything new lately- Arcade Fire performed a new song “Generation A” on Stephen Colbert’s election-night special for Showtime. The band- with a long history of political activism- premiered the post-election protest song on Tuesday, Nov. 4th as people around the world turned their eyes to the polls. NPR reported, “while summing up the frustrations and furies of an entire generation is no easy feat, singer Win Butler finds a smart angle: the deep undercurrent of impatience that comes with waiting for your turn to lead.” NPR continues, “Assuming it gets a studio version, “Generation A” will be Arcade Fire’s first release since… okay, a song on last year’s Dumbo soundtrack. But let’s consider it a sequel — and a worthy companion — to 2017’s Everything Now.”

If you’ve been craving some new Arcade Fire content you can check out their full performance on Colbert here: https://www.youtube.com/watch?v=KvqNWYggnVA&feature=youtu.be We even get a guest-star appearance from Win and Régine’s seven-year-old son. Fan in the comments of this video didn’t hold back their enthusiasm about hearing new music and started asking when we might get more. According to Craig Ramsay (who appears to have worked with the band in the past and know them personally) did give this little update in the comments on that video.