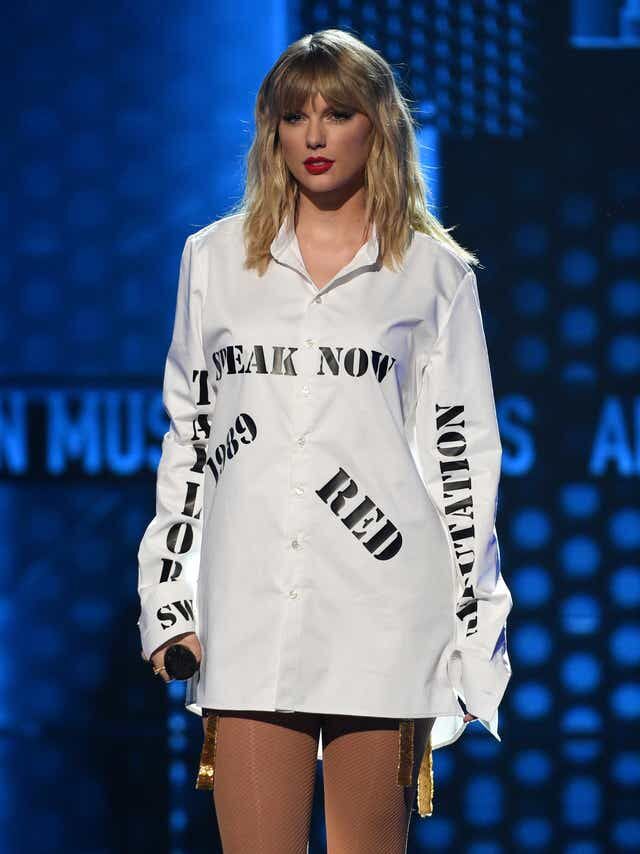 Swift at the 2019 AMAs, wearing her “stolen lullabies” amidst the scandal over ownership of her masters.

Anyone who knows me or listens to my radio show, Lemons & Lampshades, knows that I am a huge Taylor Swift fan — a “Swiftie,” if you will. My dad was actually the first person to introduce me to Swift, when he brought home a CD copy of “Fearless” in 2008 and burned it onto my hot pink iPod nano for me. I have so many vivid memories of listening to that album over and over again on my iPod — in the car, at swim meets, after school, and just laying on the floor of my childhood bedroom. Headphones on, world off.

In those quiet moments it felt as if there was nothing and no one else in the world except for me and Swift, like she was an older sister whispering the secrets of love and the world to eight-year-old me. To this day I like to recreate this experience with each new album that Swift releases: laying on the floor in the quiet hours of the night, headphones on and no distractions.

With all of the curve balls that 2021 has brought I often find myself laying on that very same bedroom floor, thinking about sitting in the back seat of my dad’s car on a rainy day in 2008, the radio blasting “Fifteen” — since, of course, my Dad has become a huge fan through the years as well — and daydreaming about what my first day of high school would be like, and having a red-headed best friend.

And then I remember that I am 20 years old, and I now know that high school is the furthest thing from a daydream, that there are so many things better than dating a boy on the football team. Now I know what it’s like to have your first kiss make your head spin, and what it is like to meet your best friend in a high school classroom (a blonde, not a red-head, in this case).

Ownership of Swift’s original recordings contractually belonged to Capitol Records, which Scooter Braun inherited in his 2016 purchase of the company, until her contract expired in 2017. After that contract expired, as well as some sketchy dealings by Braun which tried to silence Swift and maintain control over some aspects of proprietary rights to the music, Swift signed a new deal with Republic Records which allowed her to not only fully own and re-record her six previous albums but also gave equity to artists from streaming revenues on Spotify.

After years of plastering her name in huge letters on albums she thought she might never own and being forced into creative choices she did not prefer, Taylor Swift has finally earned the rights to re-record her first six albums, Taylor Swift, Fearless, Speak Now, Red, 1989, and Reputation.

The first album to be re-recorded after this deal was “Fearless (Taylor’s Version),” released about a month ago, which was intended to recreate her 2008 album the way she originally wanted it to look and sound — starting with the cover art. The 2008 album cover, with an iconic shot of Swift’s golden curls splaying out in a perfect array, was effortlessly recreated this year with a photo of a mature, natural-looking hairstyle.

Many fans have identified “easter eggs” in the promotional media for “Fearless (Taylor’s Version).”

Swift’s fan base has been known over the years to seek out secret messages and “easter eggs” in social media posts, outfit combinations, public appearances, and more. One prominent example of Swift hiding easter eggs is seen in the shirt worn on the “Fearless (Taylor’s Version)” cover, which fans pointed out closely resembles the shirt that the “Romeo” to Swift’s “Juliette” wears in the music video for her song “Love Story.” What does this mean? Perhaps a call-back to her 2019 song “The Man” — a song from her album Lover which critiques the media’s expectations and unfair gender norms — or maybe signifying Swift finding her own Love Story in her relationship with Joe Alwyn.

The re-recording is not merely a recreation of the original album, however, as Swift announced that six never-before-heard songs “From The Vault” would be released alongside the original 13 tracks from the 2008 version of “Fearless,” as well as the six additional songs released on the Platinum Edition of the album in October of 2009.